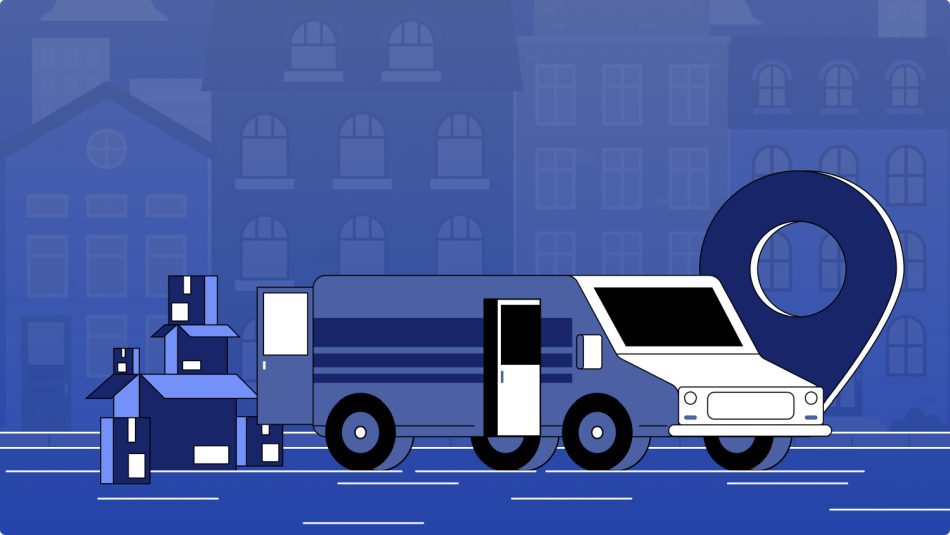 Online shopping has entered a new era during the COVID-19 pandemic. The 2020 holiday season broke global delivery records; in November of that year, delivery volume was up 25% from 2019, according to a report from Econsultancy. This year’s season is expected to be even bigger, with October 2021 already representing an 18% rise in shipping volume from October 2020. Numerous surveys have indicated that more consumers now prefer online shopping than prior to the pandemic.

This increased reliance on online shopping has contributed to the current supply chain crisis, with blocked ports across the globe and some consumers waiting months for their products.

But there is a lesser-known consequence of all the online ordering: cardboard prices are shooting up, leading to supply issues and delays across industries.

Pressure from the pandemic, combined with the ordering and delivery systems created by Amazon and other massive online retailers, has driven record demand for those cardboard boxes that pile up in mail trucks and on stoops. Paper mills have converted from books to cardboard, while U.S. retailers are importing more supplies from international manufacturers. Everything from the latest New York Times bestseller to the box with your new air conditioner may be impacted.

Cardboard prices shot up in 2021 as demand increased

From March 2020 to September 2021, the price for cardboard containers has increased by more than 10% across use categories, according to the Producer Price Index, a program from the U.S. Bureau of Labor Statistics (BLS) that measures average change over time in domestic prices. The bulk of this increase occurred in 2021, in line with increased cardboard demand.

Through the first 10 months of the pandemic, cardboard prices stayed stable as U.S. manufacturers faced uncertainty about economic conditions, says Scott Sager, an economist at the U.S. Bureau of Labor Statistics (BLS) who specializes in the Producer Price Index. But starting in late 2020, “the economy was starting to shift, and ecommerce was becoming more prevalent.”

“Ecommerce has become a more prevalent form for people to acquire products,” Sager says. “So products are typically shipped in cardboard boxes.” This drove an increase in demand for cardboard, as people shifted to buying online instead of in-person from retailers.

“It’s not just the corrugated cardboard” that’s getting more expensive, says Edwin Bennion, a BLS economist who focuses on import and export data. The price for wood pulp, the raw material manufacturers use to produce paper, has dramatically shot up in recent months as well—after a drop earlier in the pandemic.

Combine this with labor shortages, and it’s getting more and more expensive for manufacturers to produce all kinds of paper products. As the prices go up and supply becomes increasingly limited, consumers are waiting months to print and ship items.

Other parts of the world have faced even more intense price increases. Corrugated box prices in India had increased by 70% as of March 2021, according to The Economic Times, an English-language newspaper in India. In the first year of the pandemic, the price of kraft paper — a key material used in constructing these cardboard boxes — doubled.

A lot of the paper and cardboard products used in the U.S. are produced domestically, Bennion says. But many companies still rely on overseas manufacturers to supplement their packaging during price increases and shortages at home. Cardboard is coming into some U.S. shipping ports at higher rates while others see stark declines — a sign of the instability in this market.

For example, the port in San Diego, California saw over a 600% increase in cardboard imports in 2020 compared to 2019—after a decrease from 2018 to 2019. Other ports in California, Texas, and New Mexico also saw over 500% increases, while some ports in different parts of the country saw stark decreases.

No retailer ships more cardboard than Amazon—and dominance is growing 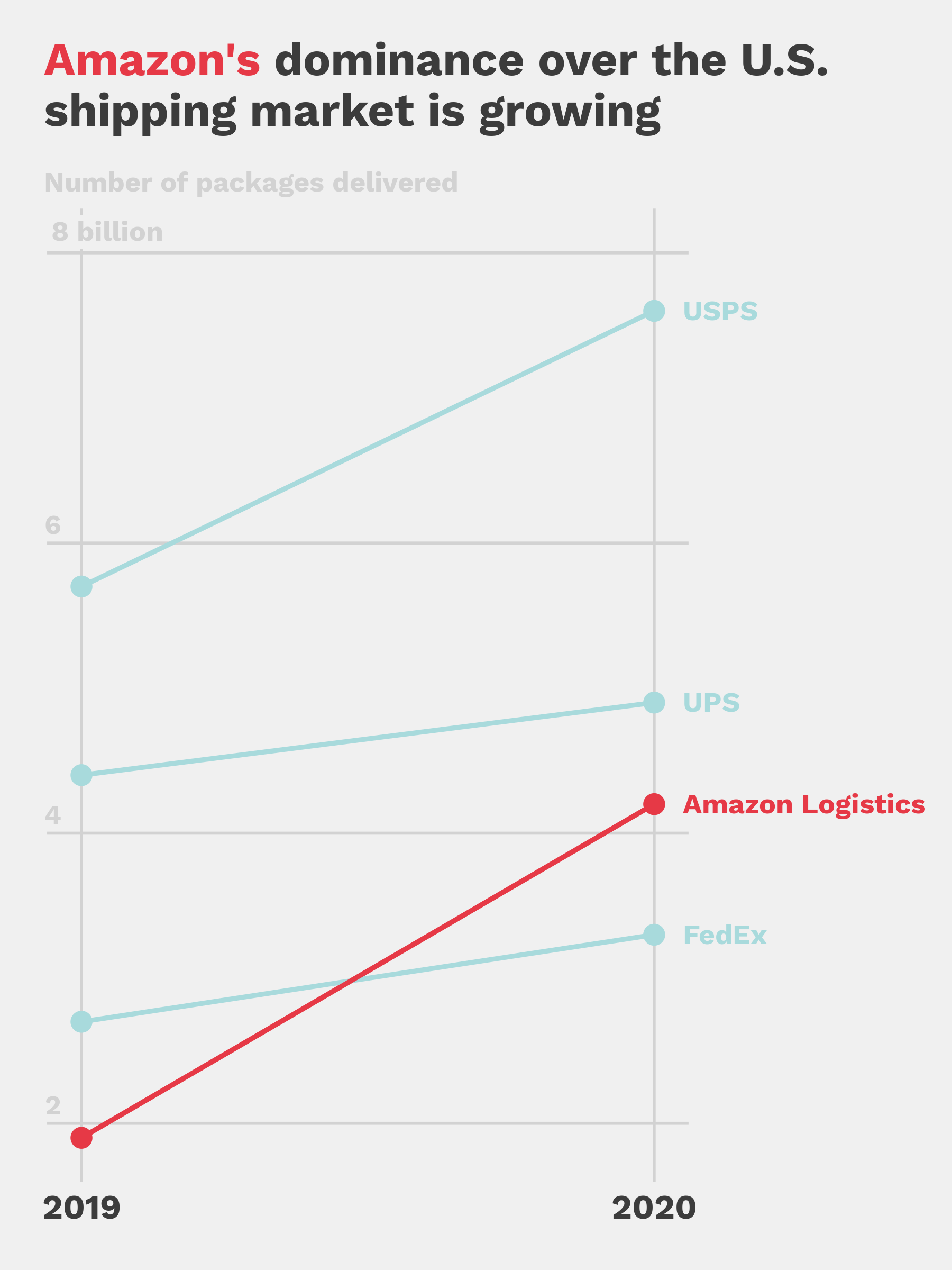 For comparison: in 2020, FedEx delivered 3.3 billion packages and UPS delivered 4.9 billion. The U.S. Postal Service is still the top shipping service in the country, but Amazon is growing fast; and Amazon’s one-day shipping promise may be far preferable for many consumers when compared to the USPS delays that are now becoming routine.

And that’s just the packages shipped by Amazon Logistics, the company’s in-house shipping and delivery service. Amazon outsources some packages to other shipping companies, particularly for “last mile delivery” — the final stage of a package’s journey from a warehouse to a consumer.

This shipping giant is driving supply challenges for small businesses, including those in other industries. As Amazon ships out more packages, it uses up more of the nation’s supply of cardboard — taking that material away from other retailers, food shippers, construction companies, and more. What’s more, recycling companies aren’t able to collect and repurpose Amazon’s used boxes fast enough to keep up with demand. According to a February 2021 Bloomberg report, the price of recycled cardboard more than doubled during the pandemic.

Cardboard shortages reverberate through many industries, impacting some products that many consumers might take for granted: their heating and cooling systems. The heating, ventilation, and air conditioning (HVAC) industry has faced increased delays and rising prices for key equipment, due in part to a shortage of cardboard packaging.

In the past year, equipment manufacturers have been forced to tell HVAC companies, “there are times when the equipment is ready, but we cannot even ship it to you” due to a lack of packaging, according to SuperTech HVAC’s owners. The cardboard shortage holds up deliveries. These delays are then passed along to consumers, who may have to wait weeks or months for a new AC and/or heater.

Along with the delays, the increasing price of cardboard has contributed to rising prices for HVAC equipment. Lennox, SuperTech HVAC’s main supplier, has raised prices three times just in 2021—one increase in January, another in June, and a third in September. And this supplier is not alone in raising prices; almost all HVAC equipment manufacturers are in a similar position. Equipment has become about 25% more expensive through the course of the year, and many manufacturers have already announced price increases for January 2022.

And the HVAC installation companies that are able to buy at those increasing prices are, in fact, the lucky ones. Some small companies—particularly those run by just one or two technicians—are not able to order new equipment at all, as suppliers prioritize their bigger customers. “The ones who really get hurt the most are owner-operators,” say SuperTech HVAC’s owners, referring to businesses owned and run by solo HVAC technicians.

At the same time, industrial packaging companies are adjusting their products to be less environmentally wasteful, according to a 2021 report from Knauf Industries. In order to generate less packaging waste, companies are opting towards more recyclable materials—like cardboard—and towards making products that can be used multiple times, along with other sustainability strategies.

Amazon is a major competitor for crucial cardboard supplies, as well as for labor. The retail giant plans to hire 150,000 new employees to increase staffing at warehouses during the holiday season. In some locations, those jobs come with a $3,000 sign-on bonus and higher-than-average hourly pay. Small HVAC companies and other local businesses trying to hire entry-level workers may have a hard time measuring up to that offer.

The publishing industry has been heavily impacted by increased cardboard demand on two distinct fronts: both the paper that manufacturers use to print books and the cardboard containers they use to ship books are in short supply. Publishers have pushed back book release dates, while bookstores have waited weeks for inventory to arrive.

Every year, traditional publishers release about 350,000 new books, according to Brian O’Leary, executive director of the Book Industry Study Group. Demand for these new books has increased during the pandemic, as Americans turn back to this traditional form of entertainment. But printing hardcovers and paperbacks has become increasingly challenging as paper mills face higher demand for a different product: packaging and shipping materials.

“Over the years, the companies that are producing standard book papers have been shifting machinery over towards packaging materials,” says Matt Baehr, executive director of the Book Manufacturers' Institute. “As we continue our love of Amazon and buying things that have been getting shipped, packaging materials have been much more profitable than book paper.” This manufacturing shift has also impacted other paper goods, Baehr says, like the infamously-hard-to-find toilet paper.

O’Leary considers it “speculative” to attribute this shift solely to Amazon. Rather, he says the massive retailer is part of a larger pattern in which American consumers increasingly want easy access to “the lowest price, the cheapest goods, and abundant sourcing.” This pattern includes outsourcing manufacturing to other countries and paying low wages to factory workers, truck drivers, and others who bring goods to market. These industries were already facing labor shortages during the pandemic, but now worker needs are at record highs—the trucking industry is currently short 80,000 drivers, according to the American Trucking Associations.

In response to supply chain challenges, many publishers have turned to a process called on-demand printing. Printing on-demand means “ultra-short runs,” O’Leary says. Instead of preemptively publishing 1,000 copies of a book at a time and sending those out to retailers, a publisher will wait for customer orders to roll in—and then print the exact number of copies that consumers have signed up to purchase.

This process is “more desirable to publishers because they don’t have to worry about inventory,” Baehr says. But there’s a downside: consumers might have to wait longer for their purchases, since they are waiting for a book to be printed and shipped from scratch. In addition to printing on-demand, publishers are increasingly making their titles available as ebooks and audiobooks, which don’t require physical materials at all.

COVID-19 is not disappearing anytime soon, and nor are retailers’ cardboard challenges. So, what options do manufacturers  and the small businesses that rely on them have for increasing supply — and getting products out to consumers?

First: more efficient recycling systems could help ensure that packages from one shipment are quickly re-used for another. The U.S.’s current system sends a lot of mixed paper, plastic, and other recyclable items in the same processing routes as cardboard, making it difficult for recycling companies to isolate the packaging material — and sending plenty of material that could be recycled into landfills.

Second, companies like Amazon could optimize their box sizes so that products fit right into their packaging, rather than sending consumers massive boxes filled with plastic air bubbles for singular small items. Kevin Hudson from WestRock, one major cardboard production company, described a “box-sizer machine” that it uses to fit boxes to products in an interview with the Washington Post.

Plus, companies can make other aspects of their packaging more recyclable. Cardboard boxes are more sustainable than single-use plastic already, but other components like sealing tape and printer ink can also be produced from recycled or recyclable material. Along similar lines, many publishing companies have signed on to make their manufacturing more sustainable, O’Leary says.

O’Leary is optimistic that publishing and other industries will take lessons from the pandemic to improve printing processes and become more sustainable. But for now, he says, “October is the new December.” Order your holiday gifts far in advance. 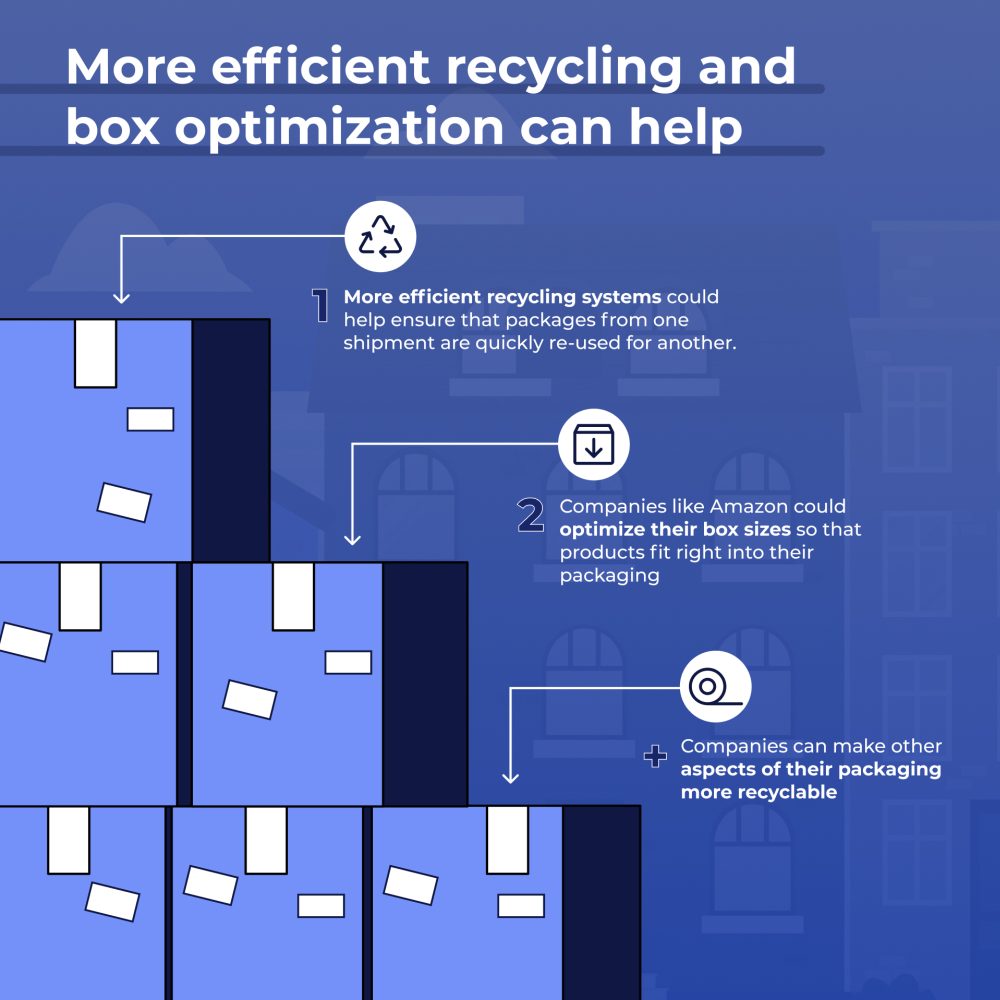